What to Choose: Mac OS or PC?

Are you camp Mac or camp PC? Both operating systems have die-hard fans. However, some tend to feel that Mac has a better operating system than windows or even Linux based systems. Regardless of this opinion, this article is going to take a look at some of the pros and cons of owning and using a Mac operating system versus a PC. 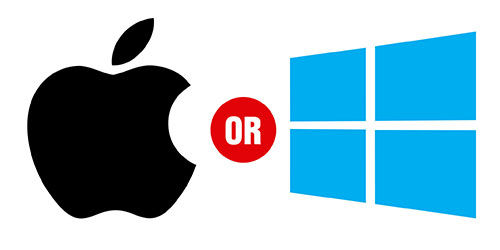 One obvious advantage of using a Mac OS is that the interface is much easier and better streamlined for users. It really seems that Mac operating systems have the users in mind, so they make a convenient and easy-to-use interface. While similar claims can be made of a Windows PC, it seems that Mac OS has a slight edge in the streamlined user interface department.  The graphical user interface, or GUI, of a Mac OS is similar to the one that you would find in the iPad and iPhone. One similarity is the ease of installing and launching apps. Both Mac computers as well as iPads and iPhones have a very similar process for installing and launching apps. You can also delete and update apps in a similar way across Macs, iPhones, and iPads. When searching for apps, it's easy to go to the app store where apps are housed. Once they have been downloaded and installed, apps are located in an app drawer called the launch pad.  What about with Windows? Well, unfortunately, it's a little bit more complicated to find apps that are installed in Windows. This is because Windows has a more complicated user workflow. Because of this, apps and programs can be installed in a variety of places. Software updates are also not as easy to manage. Each program has its own way of updating, unlike the easy way that programs can update with on a Mac OS. More consistent operating system and hardware integration  Loyal Apple fans will argue that their Mac products are better than Windows-based products because the software and hardware integration is so seamless. There is some truth to this claim. Because Apple is a hardware designer and software developer, it only makes sense that Mac’s OS and hardware would work together much better than PC. The company is better able to optimize the specs of the hardware components to their Mac computers. This helps make computing functions work in the most optimized manner possible. On the other hand, there may be Windows-based computers that have manufacturers who simply put together different hardware components from different sources. This means that Windows computers can suffer from issues of incompatibility. Not good!

One of the best advantages of the Mac operating system compared to Windows is the smaller chance of having security issues. When it comes to Mac computers there are simply less types of malware out there. That means there are less worms and viruses that can infect a computer and render it useless. Although in the past MacBook laptops and iMac desktop computers had no issues from malware, hackers are now turning their attention towards these devices and working on malware that will exploit the few security vulnerabilities that the Mac operating system has. Even with this being the case, Mac computers are generally safer than computers that run on Windows based operating systems. Part of this has to do with the fact that apps are downloaded directly from the app store which comes from Apple. The apps available in the App store have gone through rigorous tests to make sure that they contain no suspicious programming or malware.

Pre-loaded with apps for productivity

Another pro of using a Mac operating system is that when you get a MacBook or iMac computer, it already comes loaded with many apps that are useful for productivity. For example, Apple offers its own app that is similar to the Microsoft Office Suite. These apps are the equivalent of Microsoft Excel, Microsoft PowerPoint, and Microsoft Word. If you were to buy a new pc that runs on Windows, you would also have to buy the productivity suite separately. The added savings on productivity products really makes Mac look good. Another benefit of using a Mac operating system is that Mac comes loaded with apps for professionals who are creative types. You can expect iPhoto, iMovie, and GarageBand. These are just a few of the apps that creative professionals, or those who like creating as a hobby, can benefit from and they come pre-loaded with new Mac devices. Windows computers often come with random programs that are only useful to a limited percent of the population yet take up a ton of available storage space.

One of the big reasons that MacBook may have a negative image when it comes to a comparison with Windows-based PCs is the price. MacBook products are significantly more expensive compared to Windows-based laptops that offer equivalent abilities. remember, Mac operating systems are built exclusively for Mac devices. Mac OS is a proprietary product from Apple. So if there is a drawback from purchasing a Mac product, it would have to be the price.

So it’s definitely true that the Mac operating system does not have as many games available as Windows based PCs. This might make some people unhappy and to some people this might be a con. However, Apple products are not really for gamers. Although there are some good games available out there for Apple loyalists, the operating system from Apple is not ideal for those who like to play games. The reason for this is that there is limited RAM and the graphics processors are not dedicated. Windows was pretty much established as the operating system for gamers, so if gaming is super important to you, you might want to get a Windows-based PC. Other than that, Mac should be the frontrunner in your mind for obvious reasons.