Are you trying to make the decision on whether you need the new 2018 MacBook Air or if you want to spend $200 less to get the older one? Can’t come to a decision? This just might be the article that you need. This article will compare the old Air versus the 2018 Air. If this doesn’t help you make a choice, you might have to just toss a coin. 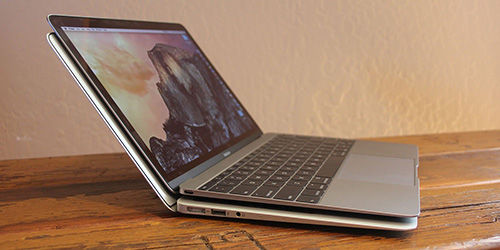 The newer processors are much faster than the processors used in older MacBook Air models. The 15W chips of the older models are just not as fast and efficient as the new 7W chips. The battery life is longer than ever before using this newer technology.

When comparing the design of the new MacBook and the older one, the newer one has a slimmer body and it tips the scale at a bit less. The tapered design is the same as the models to come before it, and the weight difference is less than a quarter of a pound. Is that enough to make a difference to you? Probably not. The new colors added to the lineup in 2018 include Space Gray and Gold. If color is important to you, you might want the 2018 Mac.

The front of the MacBook Air was updated for 2018. The bezel of previous models has been replaced with sleek black bezels that complement the device more than the bulky bezels of previous generations.

Other design elements included in the new 2018 Mac are a larger Force Touch trackpad, better speakers, a Touch ID, and a better security chip.

When Apple comes up with a new update, one of the major concerns are the ports. The new MacBook Air has two Thunderbolt 3 ports as well as a jack for headphones. Apple has gotten rid of the USB A ports as well as the SD card slot that the older model Air used to have. Now that Apple has added the Thunderbolt 3 port to the Air, the Air is up to date with the rest of Apple’s computers. This will allow the new 2018 MacBook Air to connect to both 4K and 5K displays which is an exciting change!

Because the MacBook Air has some added features, the cost has gone up a little too. The MacBook Air used to sell for just under a thousand- $999. Now, the base model is sold for $1,199. Remember, you can still get the older model of MacBook Air for $999. You will have to consider if you want the updated features enough to shell out the extra $200.

Have you made a decision yet? If you don’t mind that the features of the older MacBook Air computers are now outdated and you are more concerned with saving a little money, go for the older Air models. Just know that you will be limited by the features that are not going to be available for the older models. If you want the latest technology, go for the 2018 MacBook Air. Having the newest features will make it easy for you to keep up with the newest offering from Apple, while the older model might limit you on what you are able to do with your Mac. And who wants to buy a new device that has limited features? When you’re talking only a couple hundred dollars difference, it might be worth it to you to pay a little more at the outset and have all the newest features available.